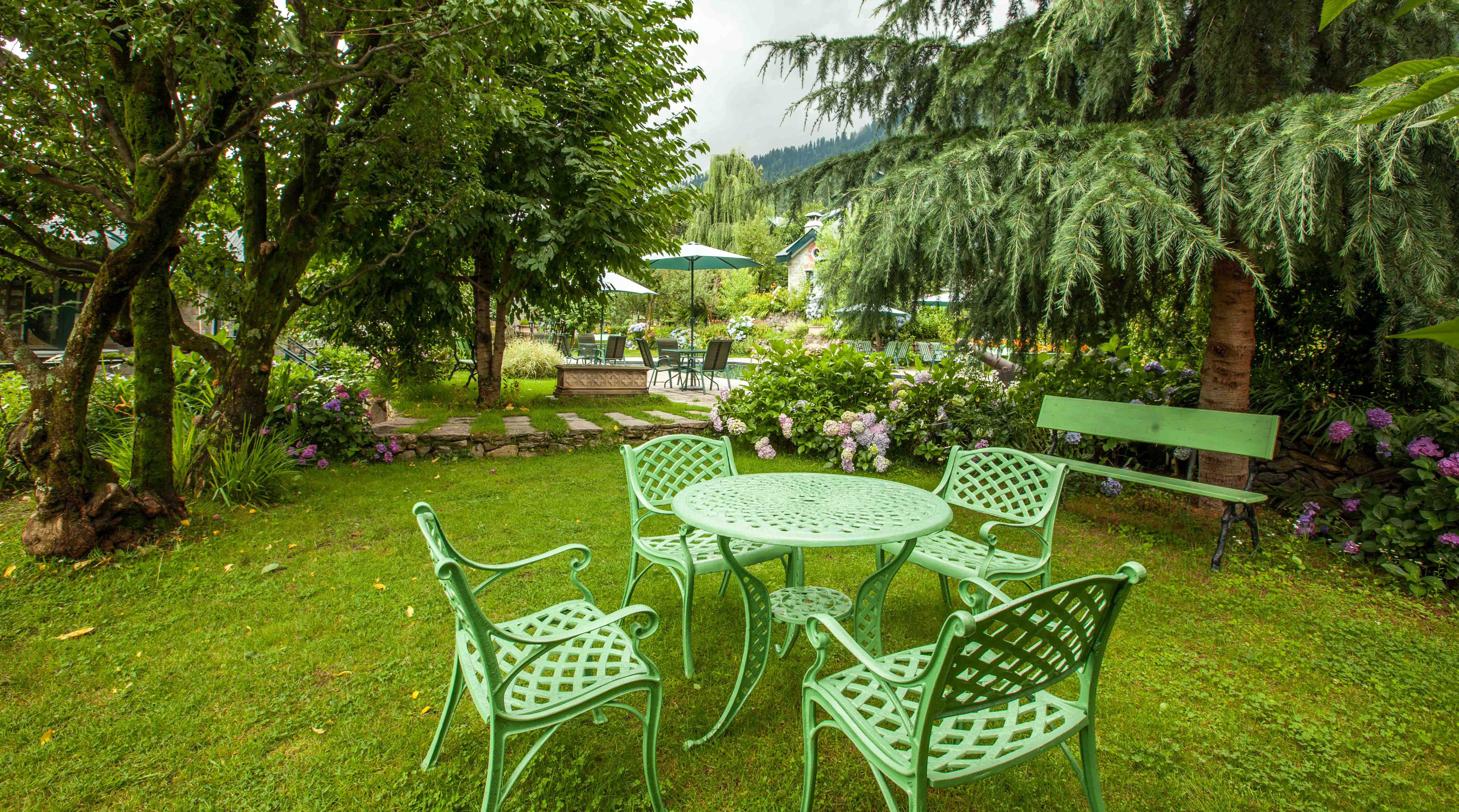 Manali lies on the banks of the river Beas in Kullu which is ever so often referred to as ‘The Valley of the Gods’. Kullu is an important district of arguably one of the most serene and bountiful states of Himachal Pradesh in North India. Manali and the surrounding areas hold great significance in Indian culture, as it is believed to be the earth of the Sapthrishi or the Seven Sages. An ancient trade route originated in Manali, leading to Ladakh and there on over the Karakoram Pass to Yarkand and Khotan. This is the land of eternal snow peaks, where plains of the Indian subcontinent give way to the majesty of the Himalayas. Kullu Valley leads to Manali, which is the indisputable adventure playground of the Indian Himalayas. Time magazine featured Manali among ‘Best of Asia’ for its ‘Extreme Yak Sport’. North of Manali lies the Rohtang Pass, which is the gateway to Leh, Lahaul and Spiti.The contrast between the fertile green terraces, lush orchards and stark mountain deserts in the area promises a truly memorable experience to the visitor. In addition to deriving much pleasure from the idyllic countryside, visitors can immerse themselves in the rich cultural kaleidoscope the area has to offer. The temples of the region are not only held in high reverence by the Indian populace, but also offer a deep insight into the Kathkuni architecture of the Western Himalayas.

The unassuming local Pahari folk are largely untouched by commercialism and participate in religious celebrations with much gusto. Of these celebrations the Dussehra festival of Kullu is the most spectacular. During this vibrant festival, Rama is worshipped in his form as Raghunath, whose idol is ferried through the streets on a wheeled palanquin pulled by the devout.

This is a mystical land of temples and deities – where Snow Leopards prey on flocks of sheep and Gods determine the proper conduct of life. The valley is far removed from the frenzy of our modern existence. Incredible terrain, incense, Tibetan monks, meditation, exotic curries: these are but some of the experiences that one is certain to carry back after one’s sojourn in the area.

Kullu Valley is also home to the Roerich Art Gallery located in the quaint little village of Naggar 18km. South of Manali. In the 1920s Nicholei Roerich, a Russian artist and explorer made Naggar his home, where he established an artistic community. One of the largest collections of his surreal artworks is on display in the art gallery for connoisseurs to appreciate. Yuri Gagarin (the first man in space) upon being asked what the earth looked like viewed from space replied, “I feel like I am looking at a Roerich painting”. Besides the Roerich Art Gallery, Naggar also has a 500 year old castle built in the Kathkuni style. In the vicinity there are several temples to engage the visitor.

Manali offers other interesting get-aways in the form of caves, lakes, natural springs and waterfalls. Arjun Gufa, a cave 5 km. from Manali is particularly significant, where the Pandava Arjun is believed to have undergone penance. The region also abounds with alpine lakes of which Bhrigu lake is one of the most prominent. This lake is located at an elevation of 4,300 metres east of the Rohtang Pass. Visitors can drive 25 km. North of Manali to the meadows of Gulaba, from where it is an overnight trek. Another significant lake is Dashaur lake, located at an elevation of 4,200 metres. The 6 km. hike from Rohtang Pass to Dashaur can easily be completed in a day. Notably, the lake is highly revered by locals. Chandratal, also sometimes referred to as the ‘moon lake’ lies North of Manali, in Lahaul and Spiti Valley at an elevation of 4,270 metres. Although, treks to the lake extend up to ten days or more visitors can undertake a rather arduous 90 km. journey from Manali to Batal in Lahaul and Spiti, from where Chandratal is an hour’s hike. Kullu Valley is also replete with hot water springs, unsurpassed for their curative powers and natural beauty. The springs are Kalath, Kheerganga, Manikaran, and Vashishta are most noteworthy. If looking for a foray into the wilderness, there are several mesmerising waterfalls in the region. Visitors will find Jogni falls, Palani falls, and Rahla falls exceptionally bewitching.

The local folk are exceedingly adept at making handicrafts for which the region is famous countrywide. Kullu shawls particularly occupy a place of pride in these creations. These exquisite works come in various forms ranging from wool, angora and pashmina. Other popular handicrafts include Kullu caps, Patti, Pattoos, Namdas, Gudmas, Pullans, and Basketry.

The Kathkuni style of building is unique to the North Western Himalayas. A grid of interlocking horizontal Cedar beams is created – and in this either raw or dressed stone is embedded. A singular characteristic is the absence of vertical members. With inherent elasticity, the design has an enormous seismic response – there have been instances when tremors have dislodged the stones from the frame and later, they have been hammered back into the intact framework of the structure.

The Pin Valley National Park, South of the Dhankar Gompa located in the cold desert of Spiti Valley is excellent for sighting large herds of Himalayan Ibex and Bharal. The elusive Snow Leopard also makes the area its habitat.

Closer to Manali, Horse Chestnut, Maple, Walnut trees flourish along with Cedar in the Manali Sanctuary. Further up from the Hadimba Temple, towards Lama dugh and Galant, green meadows and glaciers await the trekker. Brown Bear, Great Himalayan Flying Squirrel, Himalayan Monal, Himalayan Weasel and Musk Deer sightings are not uncommon. In the summer Himalayan Ibex herds can also be seen in the glacier zone and with providence hikers may spot the Snow Leopard.

Bijleshwar Mahadev : Also referred to as Bijli Mahadev, this temple is located at an altitude of 2435 metres, 11 km. from Kullu. The shrine is built in the Khash style and offers spectacular 360 degree views of the awesome mountains of the area.

Bisheshwar : This temple is situated 14 km. South of Kullu in Bajaura. The temple built in the Classical style dates back to 8th Century and is widely regarded as the most attractive temple in the valley.

Brahma : This four- tiered pagoda style temple stands in the village of Khokhan about 2.5 km. northwest of the Bhuntar airport. The temple is a fantastic specimen of primitive designs in what is sometimes referred to as the Picasso style. Approximately 80 feet high, this is one of the only two temples dedicated to Lord Brahma in the country. The only other temple consecrated to Lord Brahma is in Pushkar, Rajasthan.

Manu Maharaj : The temple of Manu Maharaj is located in Manali Village about 1.5 km. from the Manali town centre. The famous Phagli fair is held here in honour of the sage Manu, marking the beginning of festivities in the Kullu Valley. The name Manali literally means, ‘The abode of Manu’. Manu Rishi is credited to having written the Manu Smriti.

Murlidhar and Shring Rishi : These temples are located about 40 km. South from Kullu in the Chaini hamlet of Banjar. There is a five storied temple of Murlidhar (Krishna the flute player). Adjacent to this temple is the 150 feet tall tower of Shring Rishi. The edifice obviously served both sacred and defensive purposes. The only access to the upper stories is by notched tree trunks, which would be pulled up by the pastorals in case of aggression.

Parashar Rishi : This curiously attenuated Pagoda style temple is situated approximately 50 km. South of Kullu. It is obviously ancient in origin and the carving on the body of the temple, of intertwined snakes, birds, pots, foliage panels, gods and goddesses, heraldic beasts and the variety of abstract patterns is of such excellence that it compares well with the Classical style of the plains.

Raghunath : The prime deity of Kullu is Raghunath. The idol is housed in the temple built in 1660 A. D. in Sultanpur in a fusion of the Pahari and Pyramidal styles. The idol is believed to be the same that was used by Lord Rama himself, at the time of performing the Ashwangma Yagna at the Trethath temple of Ayodhya.

Vashishta Rishi : Located in the Vashishta village 3 km. from Manali town centre, this temple pays homage to the sage Vashishta Muni. The over 400 year old temple has its own hot springs and separate public baths for both men and women.